Synoypsis: Based on a true story in World War II Poland, a young Jewish woman struggles to survive after her family is murdered. Refusing to give up, she joins the Soviet resistance, and realizes that through photography she can remember the past while documenting for the future. 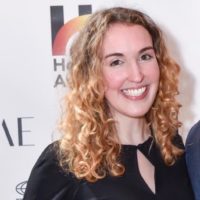 Caroline Friend is an award-winning writer and director. Her World War II set short film, Under Darkness, premiered at the Telluride Film Festival, was honored with the Horizon Award at the Sundance Film Festival, and was a finalist at the Student Academy Awards. Caroline graduated magna-cum laude from the University of Southern California, where she studied both Film Production, and History. Caroline passionately splits her time between the academic investigation of historical topics, and bringing these true-life events and people to the screen. Her work has been supported by the Alfred P. Sloan Foundation, Adrienne Shelly Foundation, Panavision, Steven Spielberg’s Shoah Foundation, and the Director’s Guild of America. She currently lives in Los Angeles and continues to seek meaningful true stories to bring to audiences.