Synopsis: Kevin is haunted by grief and has questions that only the recently deceased can answer. His search takes him to the most unremarkable of locations, a grotty storage room at the back of a rundown pub. However, what he finds there is anything but unremarkable. 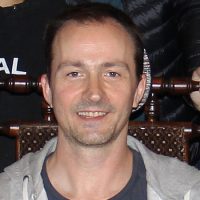 After completing his MA in Filmmaking in Spain, where he specialised in screenwriting and directing, Alberto spent a year as a Radio speaker for a local station in Madrid. In 1998 Alberto moved to Munich where he underwent a placement in Film Production at the Bavaria Film Studios; he then trained as an Avid Media Composer Editor and worked for the next 5 years in different productions, ranging from TV documentaries to corporate and travel videos.

In 2008 he started his own Production Company, Long Shot Media Ltd. During the last 10 years and under the banner of LSM, Alberto has directed, produced, shot or/and edited hundred of videos, documentaries and commercials in the UK, Spain and Germany, for distinguished clients, including BBC, Glasshead, the European Medicines Agency and Save the Children to name some.