Synopsis: On the day of her one-year anniversary with Stefan, Ana offers him an unexpected present –she agrees to be a surrogate mother for the baby Stefan can’t have with his wife. In the end, Stefan realizes that he wants something else, but it’s way too late. 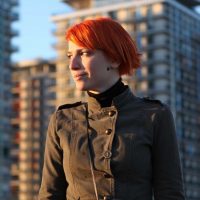 Georgiana Moldoveanu was born on July, 19th 1982 in Galaţi, Romania. After studying English language and literature and French language and literature (2001-2005), she worked for a few years in various domains. The passion for film made her enroll at the National University of Theatre and Film “I. L. Caragiale”, in Bucharest, to study film directing, which she graduated in 2014.

At the moment she studies The Art of Film Directing, 2nd year master studies, at the National University of Theatre and Film “I. L. Caragiale”, in Bucharest.