Synoypsis: On a hot and febrile day, teenage Claire ditches school to meet some friends in the woods where her memories, traumas and desires merge into tears, sweat, and sperm in a reflection on this generation’s sexual and existential disorientation. 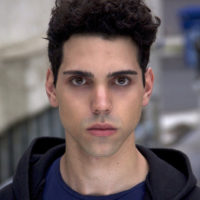 Edgar Morais was born in Coimbra and raised in Lisbon, Portugal, making his film acting debut in “Daqui P’ra Frente” directed by Locarno alum Catarina Ruivo and has since worked with directors such as Luís Miguel Cintra, Larry Clark and Victoria Mahoney. Morais has directed music videos for several bands including “Mothxr” and Grammy-nominated “Shiny Toy Guns”. In 2019, Edgar was one of only 10 talents selected to take part in the Portuguese Academy of Cinema’s “Passaporte” initiative. Edgar Morais is in production on his feature film directorial debut, “You
Above All”, which he also wrote and stars in, co-directing with Lucas Elliot Eberl, and also starring Rita Blanco, Olivia Thirlby, Anabela Moreira and Lou Taylor Pucci, among others. Edgar divides his time between Portugal and the USA.