Synoypsis: Recent graduate, Robin, returns to her parents’ house and obsessively starts to dig a hole, encouraged by an impossibly perfect girl; but as she digs, she heads further down a path of self-destruction. 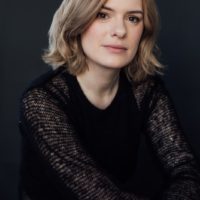 Anna is British/Canadian writer, director and actress. Her directorial work has screened at festivals including TIFF, Palm Springs, POFF Black Nights and the BFI London Film Festival where she was nominated for Best Short Film with Your Mother and I in 2016. She has won awards at Rhode Island International Film Festival, The London Short Film Festival, Thessaloniki International Film Festival and Underwire Film Festival among others and was long listed for a BAFTA and nominated for Best Short Film at the London Critics’ Circle. As an actress, Anna recently performed in Kim Nguyen’s latest feature THE HUMMINGBIRD PROJECT alongside Salma Hayek, Jesse Eisenberg and Alexander Skarsgard. She is currently writing her first feature film.