In this painful depiction of a relationship falling apart, we follow a couple on a trip intended for healing which spirals into a dream-like nightmare.

A couple goes on a trip to find their way back to each other and a sideshow artist and his shady entourage emerge from the woods, terrorizing them, luring them deeper and deeper into a maelstrom of psychological terror and humiliating slapstick. A dreamy tale of dark woods, an old man in a straw hat and a bunny family shattered to pieces.

From celebrated Swedish director Johannes Nyholm (THE GIANT, short film LAS PALMAS), comes one of the years most innovative, dynamic, and daring films on the circuit. KOKO-DI KOKO-DA packs an emotional punch through tragedy and loss in a relationship, interweaving a groundhog-day style film and absurdity through the carnival-esque characters throughout. 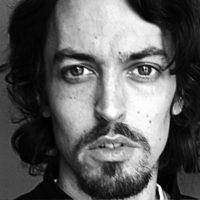 Film director, producer, artist, writer and animator Johannes Nyholm (b. 1974) is regarded as one of the most original and intriguing filmmakers of his generation in Scandinavia.