Synoypsis: A housebound man thinks he might be the only witness of a disturbing event on his television. 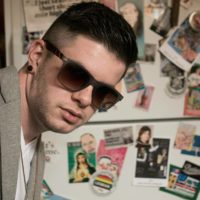 Matthew Kinahan is a filmmaker and musician currently residing in Toronto, Ontario. Upon his graduation from Ryerson University’s film program in 2015, he has primarily worked as a composer, with work featured on CBC, TSN, and film festivals across the continent. In 2017, he won “Best Score” at the New York 30Under30 Film Festival for the acclaimed short film ‘Game’.