Synopsis: Amanda and Jake are in love and want to start a new life in Los Angeles. Will they make the right decisions? The first 24 hours of their new life will take them all around the city, bringing them more surprises and frustrations than expected. 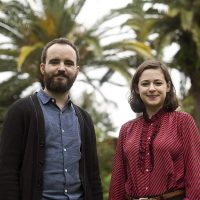 Hanna Ladoul and Marco La Via are both 27 years old but they were born continents apart. Hanna was born in Germany from an Algerian father and a German mother. She grew up in both Paris and Normandy. Marco was born in Santa Barbara, CA from an American father and French mother. He moved to the south of France at the age of 6.

After studying journalism, cinema, and history in Europe, they now live and work in Los Angeles, which they’ve called their home for the past four years.

In 2016, they directed their first narrative short film, titled Diane from the Moon and starring Spirit Award winner Mya Taylor (Tangerine). The film stood out in many festivals around the world.

We the Coyotes, their first narrative feature film, premiered at the 2018 Cannes Film Festival, ACID section.