What Do You Know About the Water & The Moon

Synoypsis: During an attempted abortion, a girl gives birth to a live jellyfish. 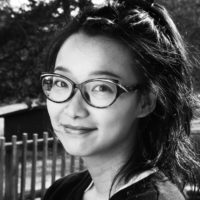 Born in the Uyghur Autonomous Region of China on the Gobi Desert, Layla Jian Luo is a poignant storyteller whose work is driven by a desire to explore versions of the world unseen. She graduated with an MFA degree in Film Directing from NYU, and holds her BAs in Sociology from China Women’s University and Film/Video Studies from Purdue University.

At NYU, Layla directed/edited her short films Nobody Says I Love You, Cheongsam and Ghost Tour, selected by numerous international film festivals. Her latest film, What Do You Know about the Water and the Moon, which tells a magical realist story about a young woman giving an abortion to a jellyfish, premiered at the 2019 Clermont-Ferrand Film Festival, Atlanta Film Festival, Vienna Shorts, Asian American International Film Festival and dozens more film festivals, and won the Special Mention for Best Student Live-Action Short at Palm Springs International ShortFest.

Layla is the recipient of the Ang Lee grant, the Hollywood Foreign Press Award, and the “artist in residence” program at Palm Springs International Film Festival. In between her directing work, Layla provides professional and artistic advice to grad film students at the School of Visual Arts as a guest lecturer.